Brick-and-mortar retailers must feel they are having to run as fast as they can just to stand still. According to the Retail Bay Report 2018, between 2012 and 2017, the sales from physical stores in the UK rose by 11.1% in value. However, 95 percent of that increase was eaten up by price inflation, which rose 10.6 percent.

No wonder, then, that  brick-and-mortar retailers in the UK and other mature retail markets must feel a bit a bit like the Red Queen in  Lewis Carroll’s Through the Looking-Glass:

“My dear, here we must run as fast as we can, just to stay in place. And if you wish to go anywhere you must run twice as fast as that.”

Of course, not all physical retailers are struggling. Some, are learning to run twice as fast and are  successfully challenging the bearish wisdom. Take, for example, Next, the fashion retailer that has 500 fashion stores in the UK and Ireland and another 200 in Europe, Asia and the Middle East.

According to its latest trading statement, Next achieved an overall year-on-year sales grow in Q1 2018 of 6 percent, with impressive online growth of 18 percent more than compensating a 4.8 percent drop in sales made in physical stores.

So why are some brick-and-mortar retailers coping better than others?

The secret to successful retailing

A strong product offering is vital, along with a flexible cost base, particularly when it comes to  leases.  Physical store operations  often have high operational gearing.  A relatively small drop in sales can push operations that were previously profitable deep into loss if the retailer cannot reduce its costs.

Next has relatively short leases, and leverage with landlords to reduce rents on renewal. And it goes whout saying that in 2018, any retailer needs a strong online presence, which Next has.

By the end of 2018, online retailing is predicted to take 17.8 percent of total retail sales compared to just 7.7 percent a decade ago, according to the Center for Retail Research, which produced the Retail Bay Report.

By 2022, it predicts online retailers will be responsible for 22.7 percent of retail sales, including one-third (33.9 percent) of non-food.

But that is probably the maximum penetration that eCommerce is going to achieve, say the report’s authors:

“We see online as reaching its maximum at roughly one-third of retail trade, still leaving plenty of opportunity  for bricks-and-mortar to retail the remaining two-thirds”

So, it is clear for all brick-and-mortar retailers and particularly those in non-food specialty retailing that they need to embrace a future in which physical stores will still have an important strategic role to play, but their contribution to top line overall revenue will inexorably reduce as online channels steal more sales from physical stores.

Online is not solely to blame

But eCommerce is only  one of the reasons why retailers have been struggling in recent years. It is true that online retailing has been cannibalising sales made by  traditional retail stores,  but other factors include weak consumer demand, intense price competition, and retailers’ costs rising faster than price inflation.

The Center for Retail Research does not believe in the Doomsday scenario in which every store will close and the UK high streets will become deserted of life. New uses will be found for existing retail outlets combining the advantages of online retailing with the advantages of shopping in stores.

Nev ertheless, it expects the number of  physical stores in the UK to reduce by a quarter in the period 2012-2022, and 2018 will be the worst year yet for store closures, with more than 10,000 outlets disappearing from the high street.

To find out how Openbravo can help specialty retailers successfully transform their stores  we invite your to replay our webinar Transforming the Store and Customer Experience for an Omnichannel World.

Fashion retailing in an era of customization and personalization 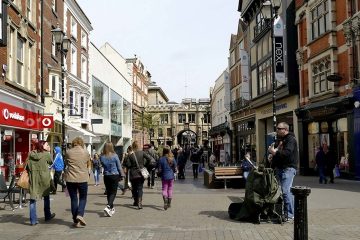